The laboratory of Molecular Physiology and Neurobiology investigates the properties of cardiac ion channels. Our main project concerns the pacemaker ("funny") If current, first described in the pacemaker cells of the sinoatrial node (SAN) (Brown, DiFrancesco & Noble, 1979, Nature 280, 235) and later characterized in cardiac myocytes and neurons.

Cardiac rhythmic activity is generated by "pacemaker" cells, which in mammals are located in the SAN. Action potentials of SAN cells have a special phase, called diastolic (or pacemaker) depolarization: at the end of an action potential, the pacemaker depolarization slowly moves the membrane voltage up to threshold for firing of a new action potential, thus generating repetitive activity. The mechanism responsible for initiation of the process of pacemaker depolarization is the activation during diastole of the pacemaker If current. As well as by voltage hyperpolarization, If is activated by intracellular cAMP, and is therefore modulated by the autonomic neurotransmitters noradrenaline (which activates If by increasing intracellular cAMP, thus accelarating rate) and acetylcholine (which inhibits If by the decreasing intracellular cAMP, thus slowing rate). These mechanisms are therefore responsible for the modulation of cardiac rate by the autonomic nervous system. If-like currents have also been described in a variety of neuronal preparations (Ih). In sensory neurons Ih is involved in the perception of external stimuli, or in modulating the transduction of sensory stimuli into electrical signalling. Ih is also expressed in some pre-synaptic membranes, where it is involved in plasticity phenomena.
Our laboratory uses the most recent techniques of electrophysiology, biochemistry, immunofluorescence, molecular and cellular biology and other. 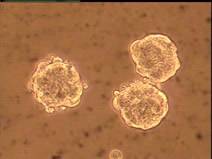 Cardiac arrhythmias are common diseases which include complex and multifactorial disorders of cardiac rhythm. Severe bradycardia (i.e. slowing of heart rate) and atrio-ventricular node block often require implantation of an electronic pacemaker as the only possible therapy. The aim of this project is to create a cellular substrate able to autonomously generate rhythmic, spontaneous activity and to act therefore as a â€œbiological pacemakerâ€; the ultimate score of this project will be to use biological pacemakers instead of the electronic devices implanted today.

The approach is based on an in vitro differentiation of stem cells (embryonic or adult) towards a cardiac, pacemaker-like phenotype during which cells are driven to acquire a set of ion channels and other proteins necessary to generate spontaneous action potentials. The functional validation of the system includes: a) characterization of electrical properties of stem cell-derived cardiomyocytes (voltage- and current-clamp); b) analysis of ion channels and other sinoatrial proteins by RT-PCR, western blot, and confocal imaging; c) evaluation of the ability of these cells to modify and drive spontaneous activity of a primary ventricular cell culture. 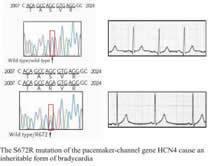 Cardiac pathologies associated with rhythm disorders represent one of the major causes of morbidity and mortality in western countries. In the last few years, molecular approaches to cardiovascular research have identified many genetic defects leading to alterations of the cardiac function. Recent work from our group has identified a mutation (S672R) in the hHCN4 gene, a human isoform of the pacemaker channel gene, which is responsible for a familial form of bradycardia (Milanesi et al., 2006). The search is now being extended to potential new mutations of hHCN4 in patients with familial forms of inherited, symptomatic cardiac diseases affecting sinoatrial pacemaker activity. Genomic DNA is extracted from patients and control individuals and the hHCN4 gene amplified by PCR. DNA fragments are analyzed by SSCP, a technique which allows to identify single-nucleotide mutations and/or polymorphisms in a sequence. Once the genetic analysis is completed (familial origin, linkage analysis and so on) the mutation under investigation is expressed in an in vitro system (cells HEK 293) to allow for functional analysis by patch-clamp and immunofluorescence experiments.

Pharmacology of the pacemaker channel

Drugs able to selectively block f-channels have a potential therapeutic use in those cases where it is useful to slow heart rate without altering other cardiovascular functions such as the ventricular contractility. Several molecules able to block the pacemaker f-channels such as zetabradine, ZD7288 and ivabradine have been developed in the past, but only ivabradine has passed all clinical trials and is now marketed as an antianginal drug in several countries with the commercial name of Procoralan. Its beneficial effect consists of a selective lowering of heart rate, with no significant adverse actions such as a reduced inotropim, a side-effect typical of less specific heart-rate inhibitors like beta-blockers or calcium antagonists. The heart-rate inhibiting action of ivabradine is due to a selective block of f-channels. Our group has shown that ivabradine blocks sinoatrial If in a use- and current-dependent way (Bucchi et al., 2002). The characterization of the blocking effect of ivabradine has also been extended to the HCN isoforms HCN1 and HCN4 (Bucchi et al, 2006). This has revealed unexpected differences in the mechanism of block of the two isoforms: while ivabradine behaves as an "open channel" blocker with native f-channels and HCN4 channels, it behaves as a "closed channel" blocker with HCN1 channels. Differences in the modes of action of the drug can be exploited to develop new molecules with higher isoform-specificity.

In 1979, Brown, DiFrancesco & Noble described a "funny" (If) current, so called because of its unusual properties, in cardiac pacemaker cells. Since If was inward and slowly activating on hyperpolarization at voltages in the diastolic range, the authors proposed that it was involved in the generation of spontaneous activity; the current was also increased by adrenaline, indicating an involvement in the catecholamine-induced acceleration of pacemaker activity and hence of heart rate. In another cardiac preparation displaying spontaneous activity, the Purkinje fibre, a "pacemaker" current had been observed previously, but it had been described by as a pure K+ current, outward at diastolic voltages (IK2 current, Noble & Tsien, 1968). The Purkinje fibre's IK2 current was similar to the nodal If in several aspects, and the apparently different ionic nature of the two currents remained a puzzling issue until in 1981, a reinterpretation of the IK2 current was proposed (DiFrancesco 1981a,b) demonstrating that the two currents were indeed identical, and IK2 had been erroneously intrepreted for over 10 years as a pure K+ current. This demonstrated the identity of pacemaker components in different cardiac cells. Following its early description, If was extensively investigated in cardiac cells (DiFrancesco, 1993). If is a mixed Na+ and K+ current, activated on hyperpolarization from a threshold of about -40/-50 mV. When at the end of an action potential the membrane repolarizes below this threshold, IfÂ is activated and supplies inward current, which is responsible for generation of the diastolic depolarization phase. If is also modulated by intracellular cAMP, by an action exerted directly on f-channels and not mediated by phosphorylation (DiFrancesco & Tortora, 1991). Raising cAMP shifts the If activation curve to more positive voltages, thus providing more inward current for the pacemaker depolarization. This action mediates the modulation of cardiac rate by the autonomic nervous system. In cardiac cells, cAMP synthesis is stimulated and inhibited by ß-agonists and muscarinic agonists, respectively; thus, sympathetic stimulation accelerates, and vagal stimulation slows, cardiac rate by increasing and decreasing, respectively, If at diastolic potentials via changes in cAMP level. Moderate vagal activity, such as the one associated to basal vagal tone, controls cardiac rate by modulation of If, rather than by the opening of ACh-activated K+ channels as was previously thought (DiFrancesco, Ducouret & Robinson, 1989). If has a fairly low single-channel conductance (about 1 pS, DiFrancesco, 1986). Binding of cAMP molecules to f-channels induces a conformational change of the protein, associated with an increased probability of channel opening upon hyperpolarization (DiFrancesco & Mangoni, 1994). This mechanism can be interpreted in terms of an allosteric cAMP-induced channel activation whereby cAMP binds preferentially, and thus stabilizes, the "open" configuration of the channel (DiFrancesco, 1999). If-like currents have been described in a variety of neuronal preparations (Ih current, Pape, 1996). Generally, the role of Ih in neurons is based on its ability to generate a depolarization following either membrane hyperpolarization, or a receptor- mediated modification of intracellular cAMP. Thus, Ih can contribute to control of resting potential and modulation of excitability, or to firing discharge. In sensory neurons Ih is involved in the perception of external stimuli, or in modulating the transduction of sensory stimuli into electrical signalling. Ih is also expressed in some pre-synaptic membranes, where it is involved in plasticity phenomena (Beaumont & Zucker, 2000; Mellor et al., 2002). The relevance of f-channels to generation and control of heart rate makes them important pharmacological targets. Several heart rate-reducing agents-molecules able to induce bradycardia without inotropic side effects- have been developed, such as UL-FS 49, ZD 7288 and ivabradine. Specific heart-rate reducing agents have a potential for therapeutic use in all those cases where it is useful to slow heart rate without altering other cardiovascular functions. Substantial advancement in the knowledge of the molecular properties of pacemaker channels has been obtained with the cloning in the late ´90s of the HCN family of channels (Hyperpolarization-activated, Cyclic-Nucleotide-gated). HCN channels are characterized by a structure similar to that of K+ voltage-dependent (Kv) and cyclic-nucleotide gated (CNG) channels. The properties of HCN channels expressed heterologously show that they are the molecular determinants of native pacemaker channels in the heart and nervous system.

This website or its third-party use cookies, which are necessary to its functioning and required to achieve the purposes illustrated in the cookie policy. If you want to know more or withdraw your consent to all or some of the cookies, please refer to the Cookie Policy By closing this banner, scrolling this page, clicking a link or continuing to browse otherwise, you agree to the use of cookies.